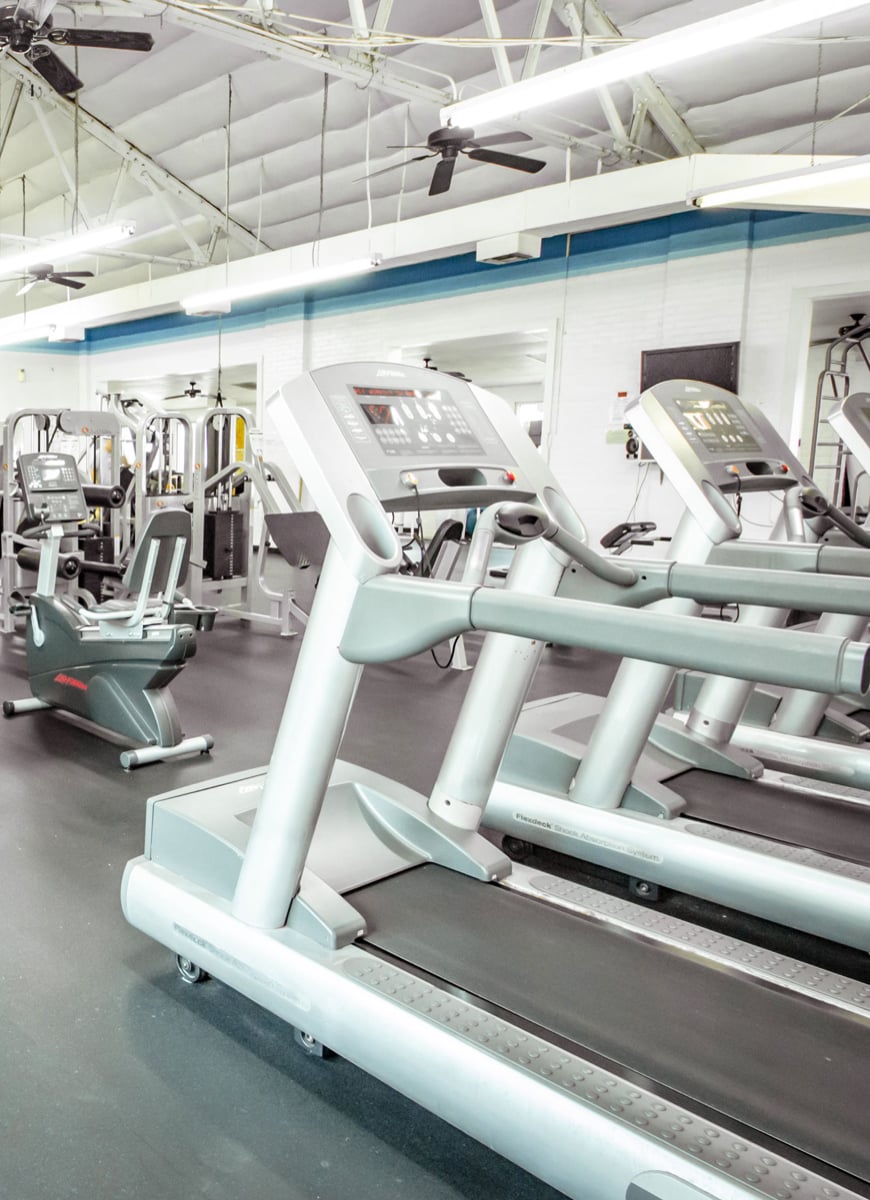 At Dad’s Club, we offer programs year round from our permanent location, where a 50-meter long-course pool, a 33-yard pool and a family pool form the heart of our facility. 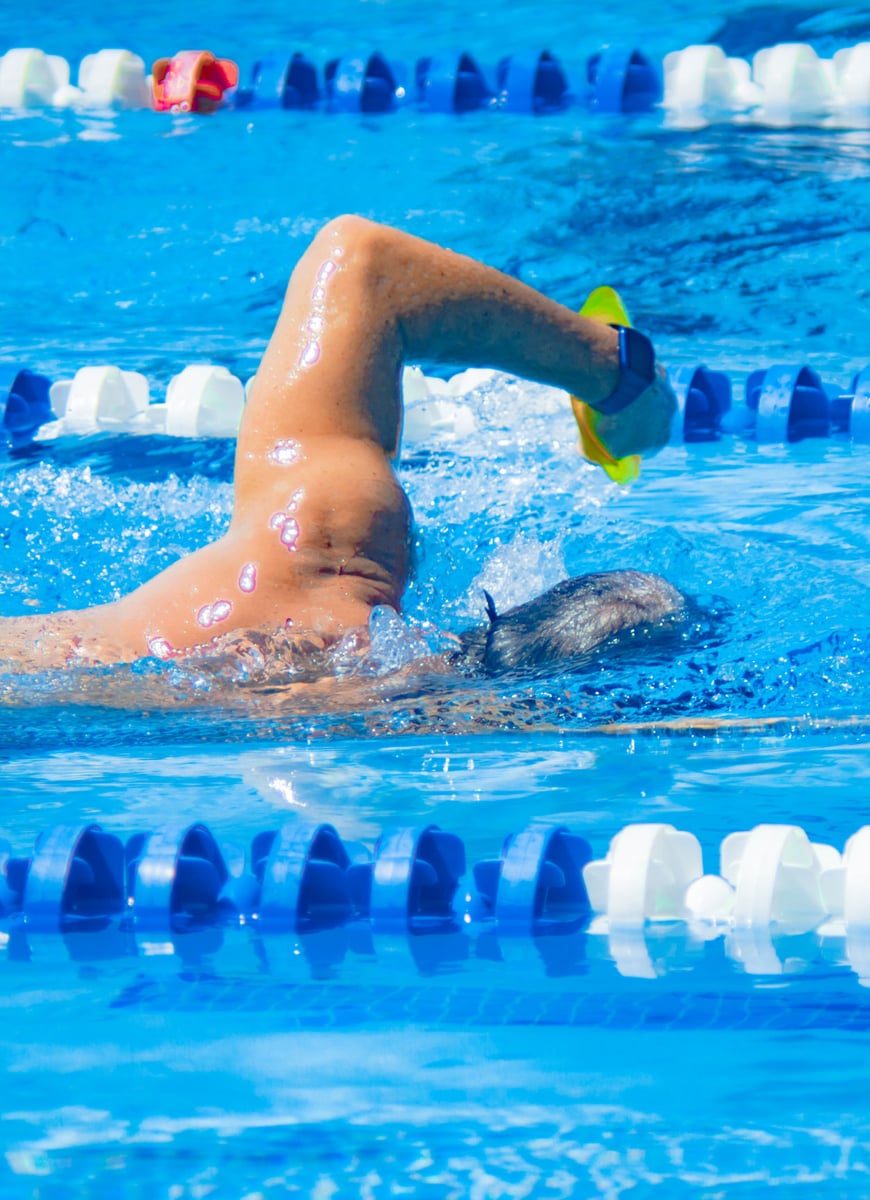 It’s helpful to plan your swim time in advance, and our assignment charts provide a snapshot of lane availability for each day. The busiest swim time during the school year is from 4:00pm-7:30pm. During that time, free swim lanes may be unavailable or limited.

The lanes of our 50-meter pool are set seasonally to either long course (50 meters) or short course (25 yards).

Thank you! Your submission has been received!
Oops! Something went wrong while submitting the form. 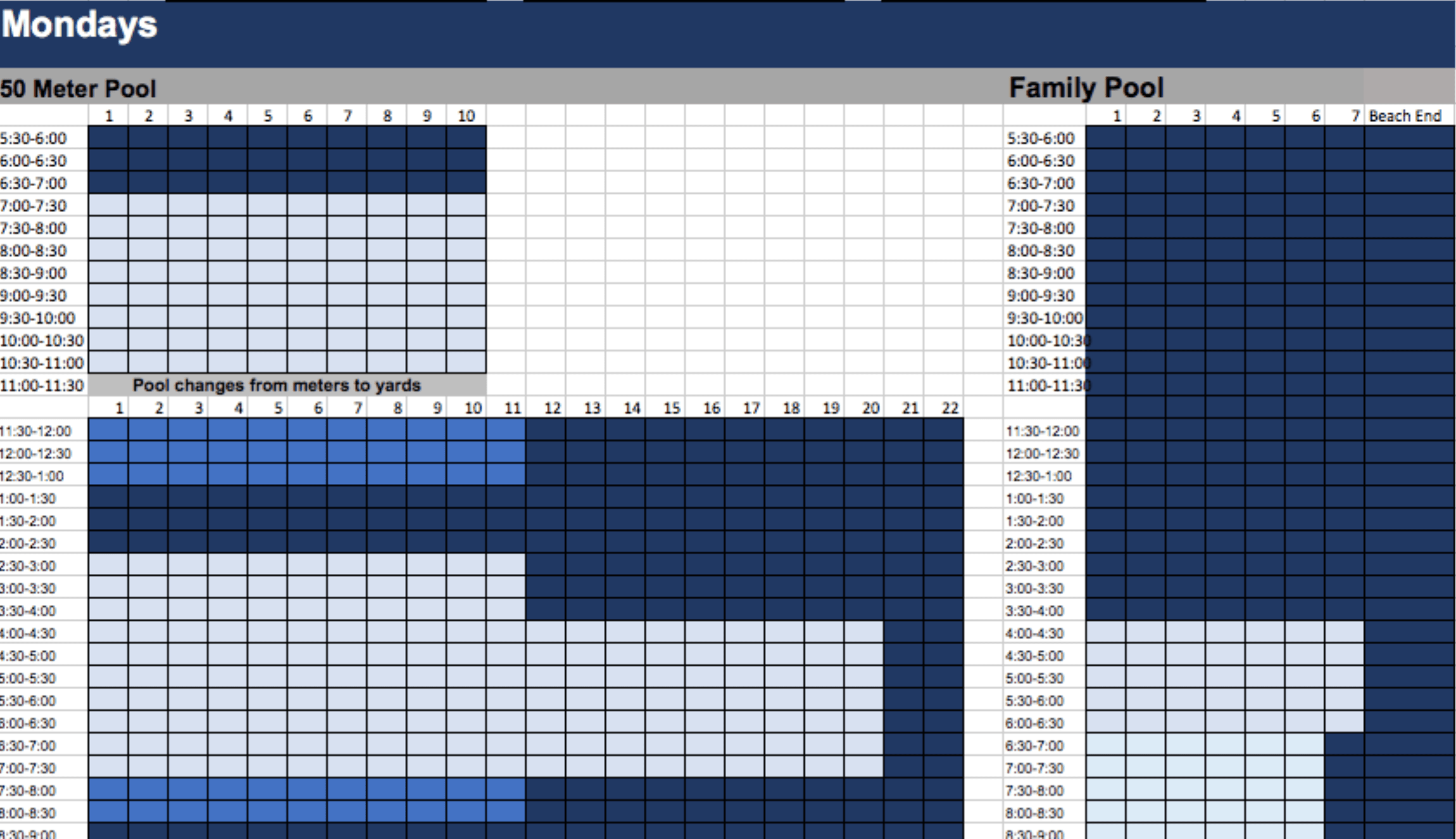 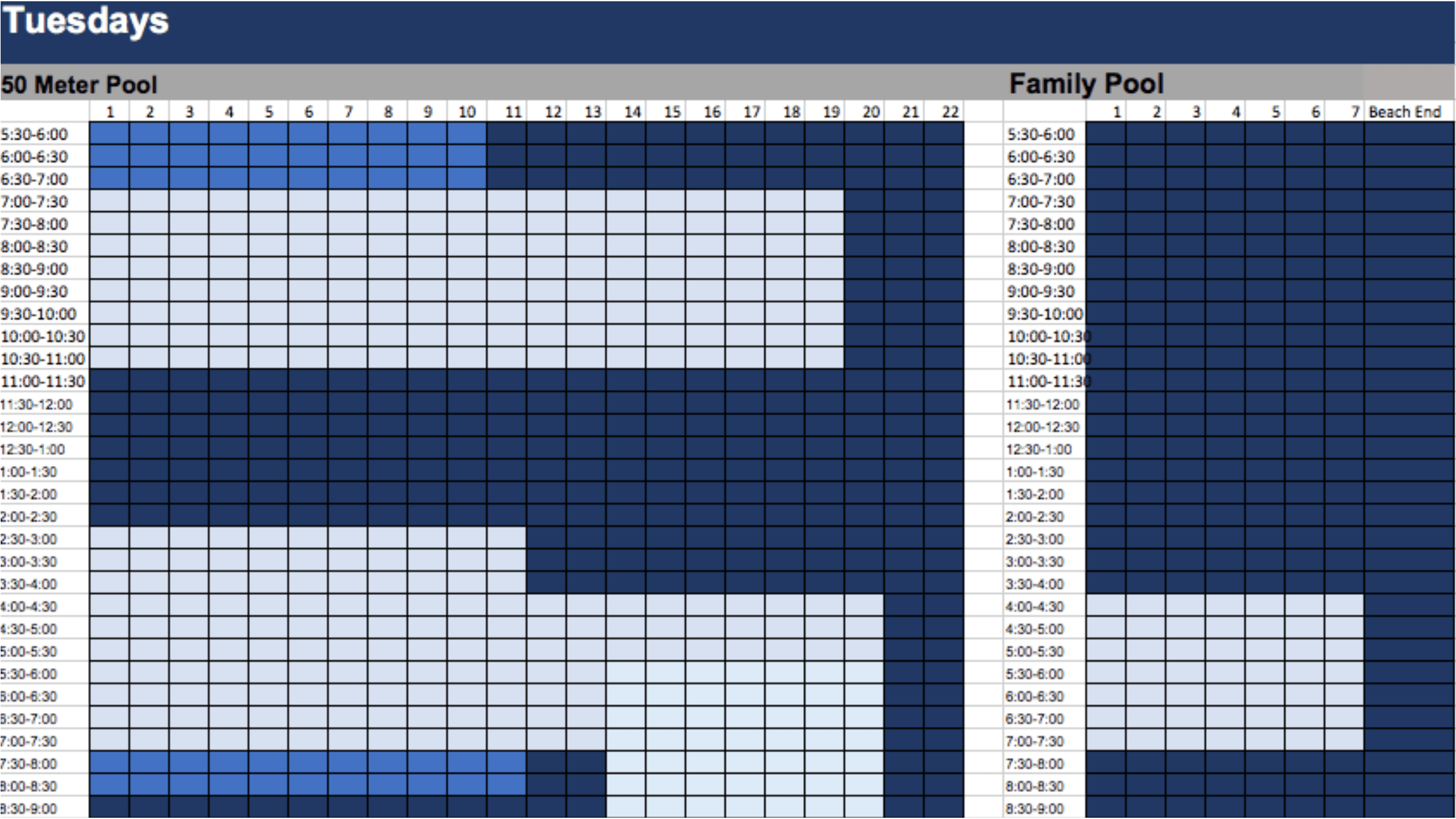 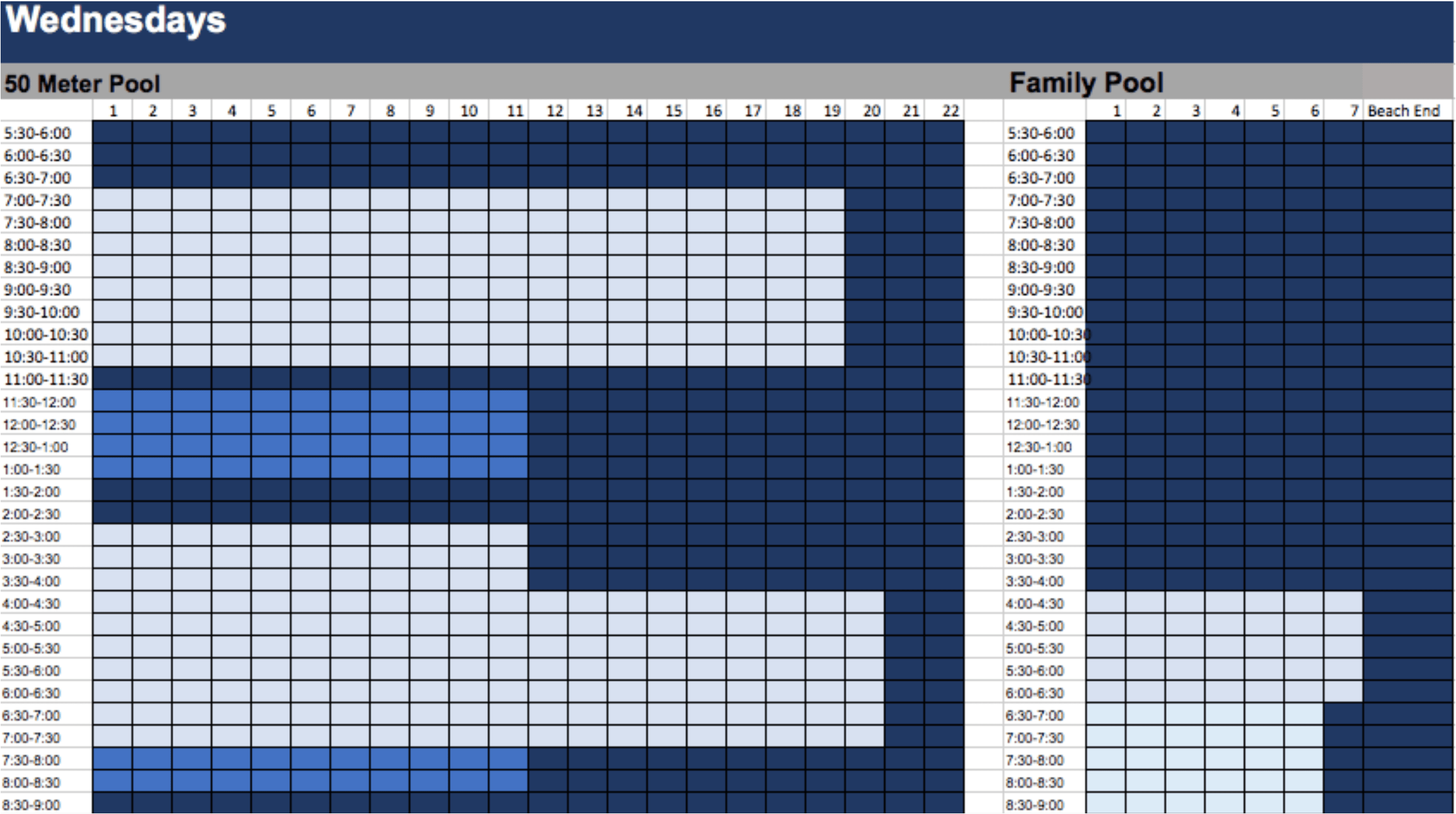 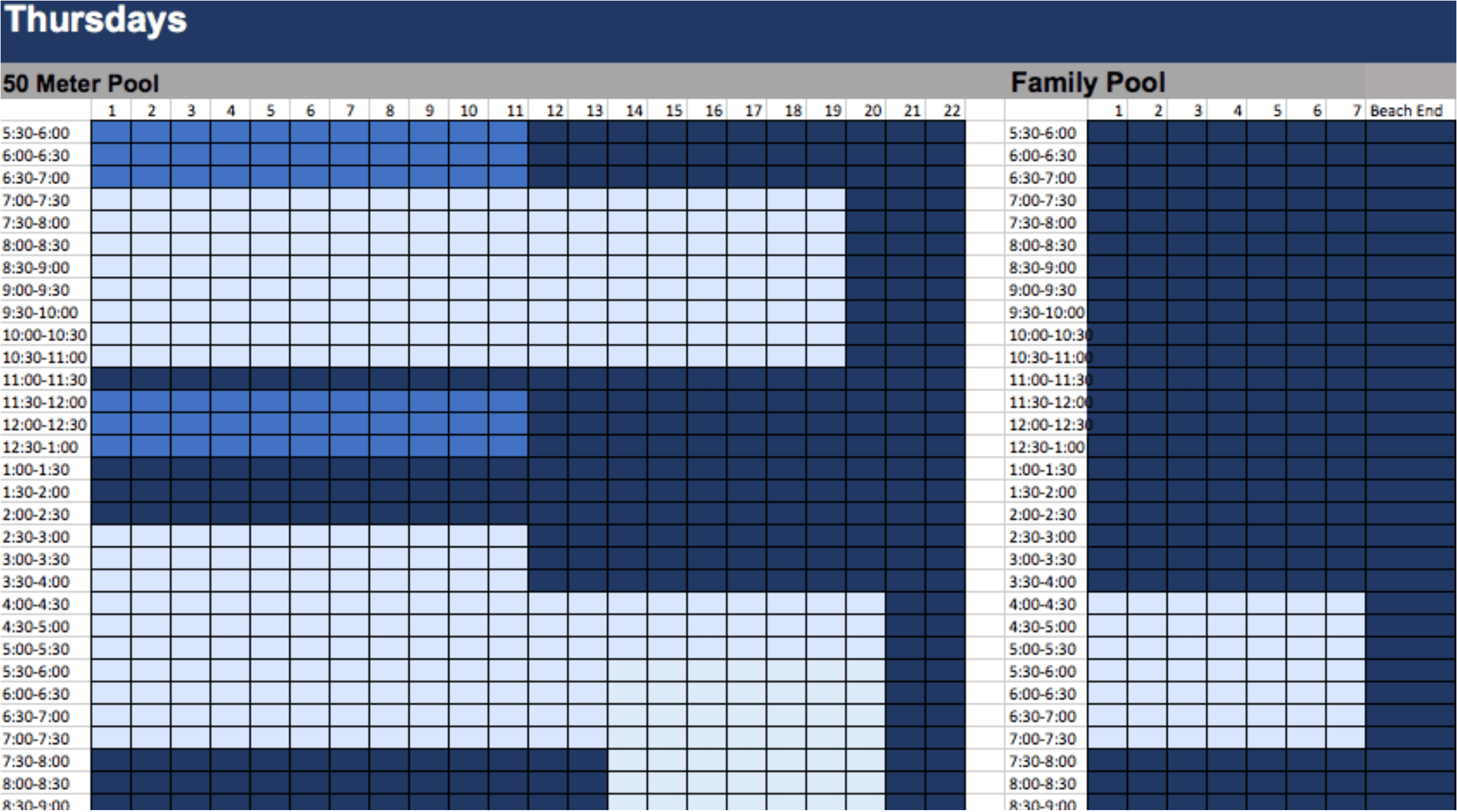 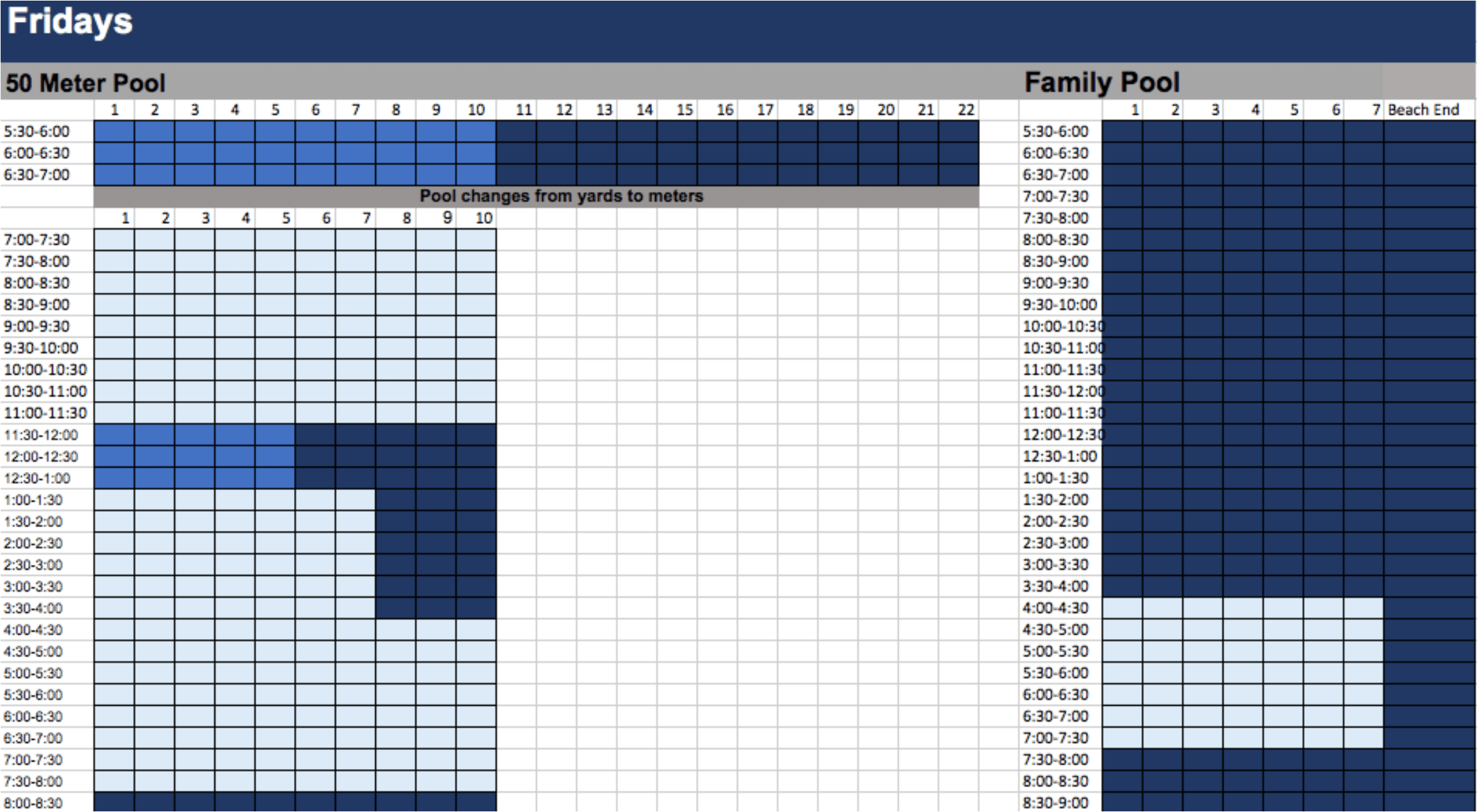 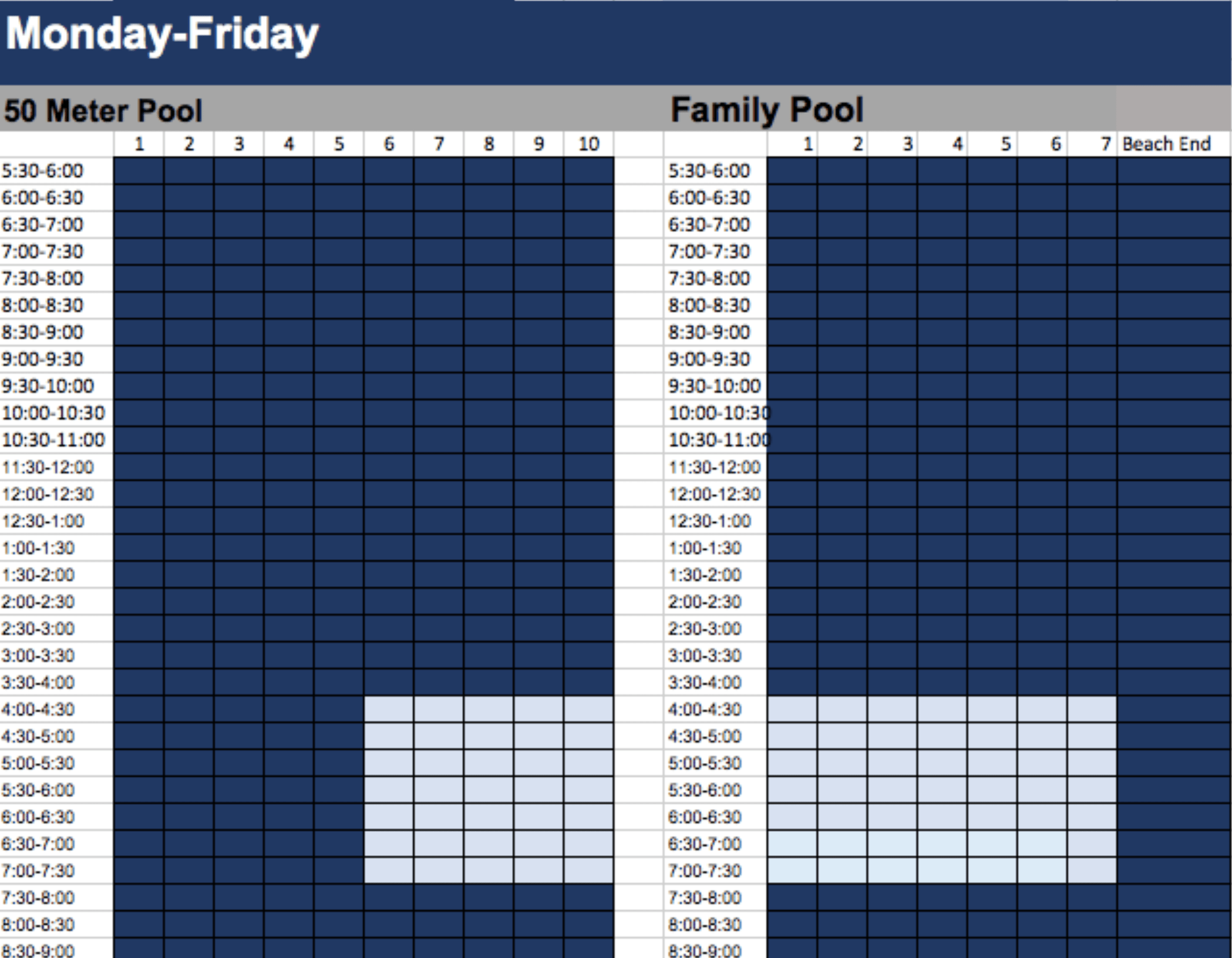 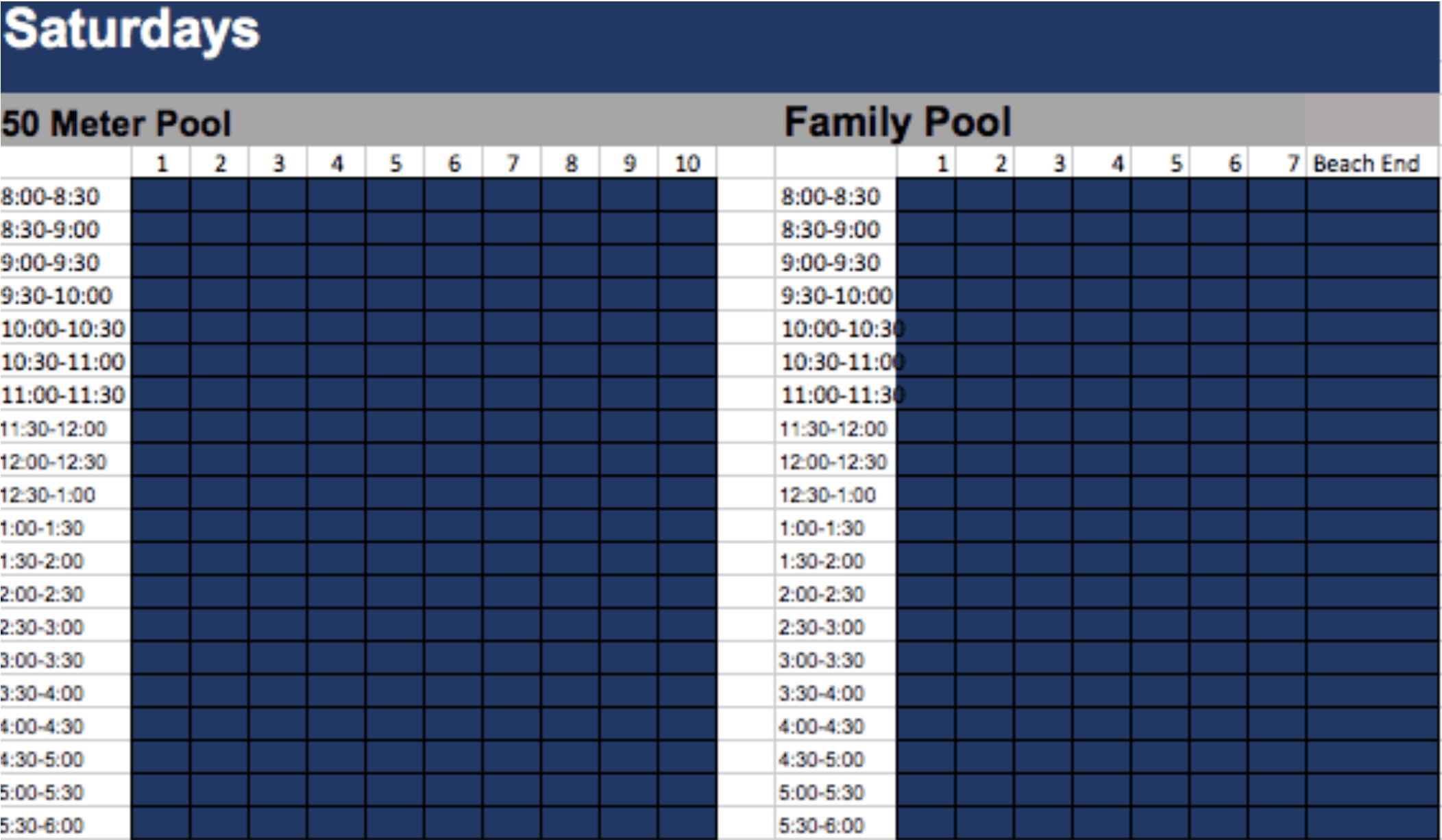 meet our coaches and instructors

Swim Team Head Coach Rey Aguilar celebrated his twenty-first year with Dad’s Club and his eleventh as head coach in 2021. Coach Rey has worked with all age groups, from beginner to national-level swimmers, and his dedication, knowledge and enthusiasm guide his swimmers to outstanding performances at every level. Rey’s swimmers have gone on to swim in college and NCAA championships. Many are nationally ranked and have qualified and placed at state, junior national, national, Olympic Trials, and international-level competitions. Rey has been selected as a Zones and All-Star coach, and he’s served as head coach for the Gulf All-Star select team. He has been a member and chair of the TSA All-Star committee and has also served on the board of Gulf Swimming. In 2019, Rey was named the Gulf LSC Coach of the Year. Rey is a former Dad’s Club swimmer and was part of El Salvador’s national team, where he represented the country in numerous international competitions. He earned a degree in business marketing and advertising from the University of St. Thomas in Houston.

Coach John McClure is a senior coach with the Dad’s Club Swim Team. He comes to us from Mansfield, TX, where he started swimming at the age of 6. Coach John swam competitively through college at Texas A&M, and he began coaching during his sophomore year of high school. Coach John has coached at every level of swimming, from novice, to national, to college. Most recently, he was the head coach of Heart of Texas Aquatics Team in Waco, TX. Coach John has coached several sectional, junior national and national qualifiers; national age group Top 10 swimmers; and one Olympic Trials qualifier. Coach John has a passion for teaching the sport of swimming and is very excited to help Dad’s Club to many more successful seasons.

Coach Dustin Myers has experience coaching various ages and levels of swimming, and he is the head age group coach with the Dad’s Club Swim Team. His experience includes young age group swimmers all the way to college and Olympic trial qualifiers.

Most recently, Coach Dustin worked with Cy-Fair Swim Club (Fleet) where he worked with various age groups. During his time at Fleet, he was an instrumental part of the club’s success at the age group, state and national levels. Coach Dustin helped produce several Gulf champs, tags, sectional, junior national and Olympic Trials qualifiers. Coach Dustin grew up in Round Rock, Texas where he swam for Round Rock High School and Texas Gold. He swam collegiately for Centenary College of Louisiana, where he graduated with a BS in health and exercise science.

Coach Mike Yearwood works with our senior and masters training groups. He has over 40 years of coaching experience at all levels of swimming and diving. Throughout his long career, he has worked with many swimmers who have qualified for nationals and Olympic Trials, and broken LSC, state and American records. Many of his swimmers have also gone on to compete in college.

Coach Mike grew up as a competitive swimmer and diver. He went on to become a professional high diver and performed for SeaWorld, Six Flags and even during ABC Wide World of Sports specials. Coach Mike grew up in central Florida and graduated from the University of South Florida.

Coach Jenny Brown is an age group coach with the Dad’s ClubSwim Team. Before focusing solely on competitive age group swimming, CoachJenny also worked with masters and outdoor education. Her experience with this wide range of ages and levels makes her one of our most well-rounded coaches.Coach Jenny grew up swimming competitively and was a collegiate swimmer at JohnBrown University in Siloam Springs, Arkansas. Coach Jenny has coached at TylerRose Aquatics and most recently at Katy Aquatics. She brings a passion for teaching the sport of swimming and is very excited to help Dad’s Club continue building on our success.

Coach Leonel Dubon is an age group coach with the Dad’s Club Swim Team with more than 25 years of coaching experience. Throughout his long career, he has worked with all different ages and levels. Coach Leonel has developed countless Texas Age Group State (TAGS) qualifiers, with many becoming TAGS finalists and champions. He has also helped many of his swimmers qualify for sectionals and become nationally ranked in their age groups.

Coach Rushed Smith taught swim lessons in our ‘Learn to Swim’ program for six years and coached our Spring Valley Dolphins swim team during the summers before joining the competitive team staff. He now coaches with the Dad’s Club year-round swim team. Coach Rushed has extensive experience working with a variety of levels and ages, and he’s certified in lifeguarding, first aid and CPR, and as a Water Safety Instructor and Life Guard Instructor. He attended Alief Taylor High School and graduated in the class of 2008.

Coach Jorge Mijares currently works with our morning masters groups. He is a passionate swim coach with over 15 years of coaching experience. He has worked with various levels and ages throughout his career. One of his areas of focus is working with adults and open water swimmers.

Coach Jorge began his competitive swimming career when he was six years old and continues swimming till this day. As a masters swimmer, he has participated at many national and international competitions. He is originally from Venezuela and currently holds several Venezuelan national masters records.

Coach Eva is the Aquatics Director for the Dad’s Club Aquatic Center. She started swimming at the age of 3 and never looked back. After mastering the butterfly in the baby pool, Coach Eva swam competitively from age 5 to 18. She joined Dad’s Club in 2007. As the aquatics director, Coach Eva understands that all children learn differently, and she works with her instructors and students on providing age- and skill- appropriate swim lessons for all. Coach Eva teaches swim lessons, coaches our STREAMLINE clinic and serves as head coach for the Spring Valley Dolphins. In addition to managing the Dad’s Club Swim Start program, she helped found the “Project Swim for Life” water safety and swim lesson program in the Spring Branch ISD and has been recognized by the district for her dedication to student wellness. Coach Eva attended Sam Houston State University, where she majored in kinesiology and minored in special education. She has been married for over 25 years and has three daughters, all of whom have worked at Dad’s Club.

Coach Brandon is new to the Dad’s Club Swim Start program. He teaches H2O Tots 1 through Advanced Stroke Instruction. Coach Brandon began swimming competitively while in high school. He was a letterman for Eisenhower High School and he’s been a swim instructor since 2011.

Coach Lexie is a longtime swimmer who loves to teach swimming. She believes that all children should learn water safety and know how to swim. At Dad’s Club, Lexie coaches our Stroke and Endurance classes, and she teaches in the Swim Start program. Along with coaching, Lexie attends Sam Houston State University, where she is majoring in animal science. Lexie was a member of the Dad’s Club Swim team and  a UIL state qualifier for Memorial High School. Her motto since she was a young summer league, high school and USA swimmer is “JUST KEEP SWIMMING!”

Coach Lorin has been swimming since he was 14 years old. He  held AAAA times in freestyle by the age of 17 and won the 50m freestyle at the Junior Olympics. Lorin holds a BS in mechanical engineering and he worked in the chemical manufacturing industry for many years, all while coaching swimming part-time or on a volunteer basis. After 14 years in the profession, Lorin left engineering to coach. He has coached at Dad’s Club since 2015, working primarily with adult triathlete, masters and fitness swimmers. Lorin specializes in minimizing/eliminating shoulder pain, and he also enjoys working with the mental aspect of high performance. Lorin has coached many to reach their goals, from IRONMAN World Championships and achieving TAGS qualifying times, to simply overcoming fear of the water.